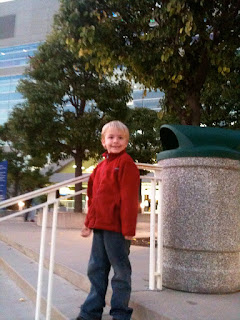 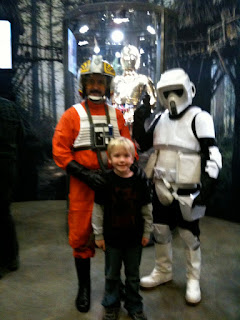 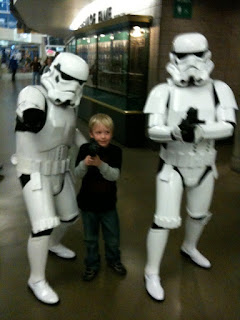 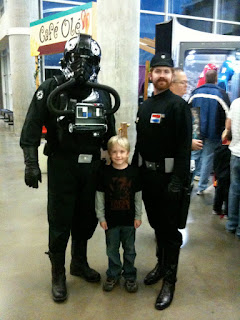 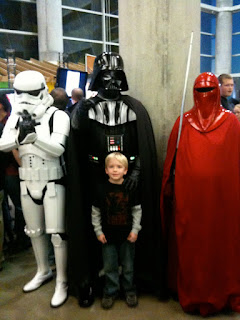 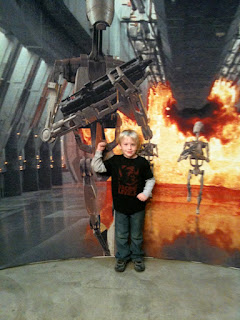 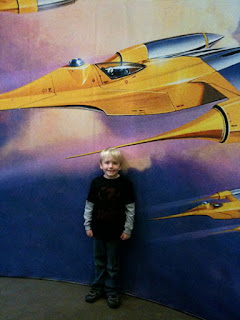 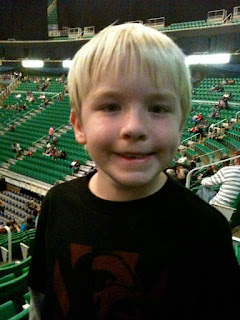 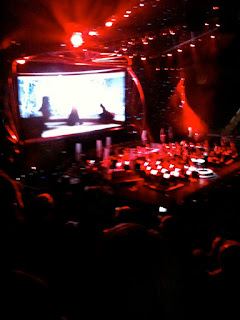 In October we heard that Star Wars in Concert was coming to Salt Lake. We immediately set about trying to find tickets to it, only to
discover that they were pretty pricey.  Nick and I decided not to
mention it to Jacob, as we figured it was not in the budget.

Well, the day of the concert, I was checking the ads on KSL (thanks to
my good friend Nova) and found the tickets for half price!  I was so
excited, and immediately bought tickets for Nick and Jacob to go.

These pictures were taken with Nick’s cell – and needless to say, the
concert was a hit. Before it even started you had the opportunity to
walk around the arena and meet the different Star Wars characters.
They had exhibits, replicas and various representations of the movie.
Jacob was even wearing his “Vader Lives” in honor of the occasion.

The concert itself was incredible.  There was a full orchestra (the
Star Wars orchestra) and a four-story movie screen behind them.  C3PO narrated different scenes/themes from the movie.  Nick and Jacob were completely entranced.

When they got home that night, they were both giddy with excitement.
I am so happy that they had the chance to make such a great memory!
Posted by Laura at 3:55 PM

What fun! I can just see Nick and Jacob's excitement!

I see you guys lean toward the dark side....many pictures, but where are the good guys? :) Just joking, I'm glad they had fun.

Jacob looks like he had a great time! Our family went when this was in Houston, and Ian had a blast. He likes the 'dark force' best too :)

I love the picture with the storm trooper! Jacob's such a doll.