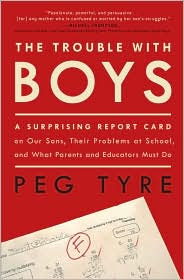 "Too often, the behavior of girls is the gold standard. Boys are simply treated as defective girls."
-Michael Thompson

I picked up this book, The Trouble with Boys: A Surprising Report Card on Our Sons, Their Problems at School, and What Parents and Educators Must Do, from the library last week. It was on the new book shelf and sounded quite interesting, especially as I am the mother of two boys. It sat on my desk as I read through the other books that I had picked up at the same time - mostly fiction bestsellers. When it came time to return to the library last night, I put the book in the car with the books I had finished. Since Nick was driving, I took the time to start reading it. I quickly found myself reading parts of it aloud to Nick.

Here is the synopsis:

From the moment they step into the classroom, boys begin to struggle. They get expelled from preschool nearly five times more often than girls; in elementary school, they’re diagnosed with learning disorders four times as often. By eighth grade huge numbers are reading below basic level. And by high school, they’re heavily outnumbered in AP classes and, save for the realm of athletics, show indifference to most extra­curricular activities. Perhaps most alarmingly, boys now account for less than 43 percent of those enrolled in college, and the gap widens every semester!

The imbalance in higher education isn’t just a “boy problem,” though. Boys’ decreasing college attendance is bad news for girls, too, because ad­missions officers seeking balanced student bodies pass over girls in favor of boys. The growing gender imbalance in education portends massive shifts for the next generation: how much they make and whom they marry.

Interviewing hundreds of parents, kids, teachers, and experts, award-winning journalist Peg Tyre drills below the eye-catching statistics to examine how the educational system is failing our sons. She explores the convergence of culprits, from the emphasis on high-stress academics in preschool and kindergarten, when most boys just can’t tolerate sitting still, to the outright banning of recess, from the demands of No Child Left Behind, with its rigid emphasis on test-taking, to the boy-unfriendly modern curriculum with its focus on writing about “feelings” and its purging of “high-action” reading material, from the rise of video gaming and schools’ unease with technology to the lack of male teachers as role models.

But this passionate, clearheaded book isn’t an exercise in finger-pointing. Tyre, the mother of two sons, offers notes from the front lines—the testimony of teachers and other school officials who are trying new techniques to motivate boys to learn again, one classroom at a time. The Trouble with Boys gives parents, educators, and anyone concerned about the state of education a manifesto for change—one we must undertake right away lest school be-come, for millions of boys, unalterably a “girl thing.”

We have been quite fortunate in the quality of the preschool that Jacob attends. His teacher, Ms. Pat, understands that preschool is not the place to stress the kids out with unrealistic expectations of scholarly performance. When she visited with us at the beginning of the school year, she shared the daily schedule. As a caveat, she explained that this schedule some days just might not work out. Some days the children may need more time at the playground, and less time inside.

Instinctively, I want to protect Jacob's childhood. I don't want to pressure him to be the next Einstein at age 5. I want him to learn, yes, but I want that learning to take place through play. One of the main reasons why Nick and I chose this preschool was because the philosophy of Ms. Pat was similar to ours. She wants the kids to have a positive social experience, and to be exposed to learning in all different manners. This is not to say that Jacob hasn't practiced writing his name there, or that he hasn't been exposed to proper learning. There is circle time, and there are certain expectations at various times in the day. But those expectations are realistic for a classroom of 3, 4 and 5 year old children.

When Jacob was younger, I tried to shield him from playing with guns. We didn't have any gun toys, we restricted violent cartoons/shows and generally tried not to expose him to it all. When he was 2 1/2 years old, he started building "shooters" out of his LEGO toys - he didn't even have the vocabulary to say "gun." We had tons of rules: you can't shoot people, you can't shoot trees, you can only point to the ground or the ceiling, etc. As Jacob has grown older, we have relaxed these rules (even to the point of buying him a pop gun from Cabela's and a star wars gun too!). I don't know why we started to relax the rules - I think it had more to do with me tiring of asking him to stop and redirecting him - "pretend your finger is a fire hose, shoot water out of it." Now? Jacob loves to reenact scenes from Star Wars, his favorite movie (he's only seen the old school ones). He runs around the playground, pretending to shoot Darth Vader and save Princess Laia. Up until yesterday, I cringed when I saw him do that. I felt embarrassed that my child would engage in such violent behavior. I did not want to raise a serial killer.

Tyre addresses this point in chapter 4 (the preschool chapter) about imaginative play and boys. She discusses boys' fascination/inclination/desire to play bad guy/good guy, and to play with guns and engage in imaginative "violence." In the book, psychologist Michael Thompson suggests that rather than outlawing violent play, we should pay closer attention to what it is really about.

Usually, it reenacts the age-old struggle between good and evil, "but" says Thompason, "it's really about something more. It's about courage, loyalty, risking all to save friends in the face of powerful foes." Little boys are playing at being the best, most compassionate, most heroic kind of men imaginable. Thompson and others believe that at least some of that fantasy type play has a place in school.

I am only on chapter 5 of the book, but already I feel excited. This is something that can help me. This can help Nick. And in turn, we can help our boys.

Any thoughts? Oh, and I did not return the book to the library. 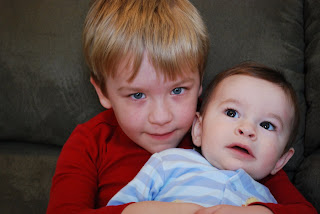 That is a great book! When you are done with it, check out Raising Cain. You'll find a lot of the same philosophy there.

Ben and I struggle with the same sorts of things with Ian. He is a smart kid, reads frighteningly well, loves learning, and yet suddenly in kindergarten his teacher labeled him as struggling in areas that are perfectly normal for a boy his age (writing and fine motor skills) or 'working independently' (which basically boiled down to him being easily distracted in a class full of 20 5 year olds, imagine that!).

Our long term goal is to get him into an all boys school by junior high. We'd do it sooner but the closest one is across town, and I don't think a small child should have a daily commute. We both worry about the lack of male teachers and role models in schools, and how that affects young boys, and the expectations set out for them.

Thanks, Heather for your comments! I worry about Jacob encountering the same experiences next year in kindergarten. Nick and I agree with you and Ben about finding an all boys school - how great that Houston has one!

I will most definitely be checking out Raising Cain. It is actually mentioned a few times in the book.

Have you ever read Real Boys by William Pollack? It is different, but still a great book when it comes to raising boys.

Thanks for your insights - good luck with Ian. How great that his parents understand and advocate for him!

Sounds like an awesome book! We had very strict rules regarding gun play in our house, as well, especially since we own hunting rifles and a shot gun--we wanted to make sure that our kids grow up with a healthy respect for the powerful tools that guns are, and are very clear on their proper use. Our little guy first displayed an understanding of the concept of good vs. evil at about 18 months old. "Bad guys" was one of his first phrases. He's been fascinated ever since! The day I realized that I DO want my son to be a valiant defender of the helpless and the truth, although I hope he can do that without physical weapons, was a turning point in my perspective of his preoccupation with fighting. We very quickly learned that we wouldn't be able to prevent our son from "playing guns," and that we should instead strive to focus that energy through constructive outlets, positive role models and a strong moral compass. We still don't allow any toy guns that look like real guns and continue to emphasize that guns are not toys and that toys (water guns, nerf guns) are toys and not real guns, nor do we allow (inasmuch as we can control it) even pretending to shoot people (friends, adults, babies, etc.) He is allowed to pretend that he's hunting for food or protecting us from imaginary bad guys. We've had conversations about how we don't LIKE to kill anyone, even bad guys, and if they will become good guys and not hurt us, we won't hurt them. We're still working on the concept of not lashing back at playmates that hurt him...It's interesting to hear that other well-meaning parents have had similar experiences.

I have always encouraged my boys and girls to playact. It helps them to handle situations and reenact them in a situation they can control. It is fun to read the research behind it and find out I was doing it right!! I love the updates to your blog, Laura, you are doing a great job with it and especially as a mom!