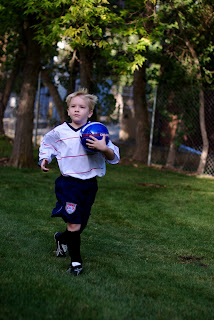 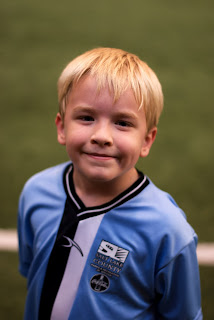 Jacob started soccer this past week. He has been looking forward to it all summer long. We were going to sign him up for it last spring in TX, but with preparing for the move I didn't want to add anything else to our already hectic schedule. We bought him a team USA jersey a few weeks ago in preparation for the World Cup next summer (Nick can't wait), and he has his own uniform from his team, the light blue team - which we have unofficially named the "Blue Thunder." Tuesday night was his first game and it was a blast! He is in a non-competitive league, and he really loves it so much. You can see the happiness on his face when he is out on the field.

And let's be honest, it is completely amusing to see a whole gaggle of kindergarteners chasing after a soccer ball in a clump.

What a cute blog! We need to go to a game. It will be fun.

What a great way for kids to have fun - that game video brings a smile to your face, just seeing their joy!
What a boy! (of course, I'm his grandma saying that!)

Great soccer game! Glad he is enjoying it!